USA (IBS) — “Why is it that people love stories so much,” wonders Adam Lewis Greene, “yet they view reading biblical literature as a chore?”

The increasingly fragmented nature of media today–from the 30-second sound bites of politicians to 140-character rants on Twitter–hasn’t diminished the power of story. We love to get caught up in a sweeping narrative. Some of the highest-grossing film series of all time–Harry Potter, Lord of the Rings, Narnia–are based on expansive literary works.

Yet, when it comes to the Bible, we have a much different experience. Most of us don’t get swept up in its unfolding drama. Few of us can imagine reading the Bible for hours on end and losing track of time because we were so engrossed in its story.

The conditions are clearly right…
Adam Lewis Greene is part of a growing chorus of voices asking whether the format of our modern Bible is part of the reason so many of us struggle to read it well. “Book design is often something we don’t think about,” he explains in a video on his Kickstarter page. “The book is actually doing work to eliminate distractions. It’s doing this to present the content in a way that is beautiful, inviting, and makes the story the center of the reader’s experience.” 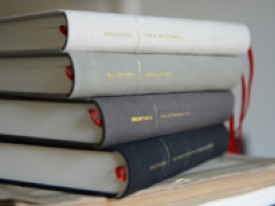 This may be true when it comes to your typical book. But the Bible is anything but typical. At times, it feels as if distraction was built into our modern Bible on purpose. Our attention is constantly being pulled away from the text by a footnote here, a cross-reference there, or perhaps a study note at the bottom of the page. “We see a ton of text,” Adam laments. “It takes us forever to be able to turn a page.”

Is it any wonder most people find the Bible “dry and boring,” as Adam puts it, when its presentation feels more like an encyclopedia than a literary work of art?

It’s tempting to assume that’s just the way things are, so that’s the way they always must be. Indeed, many of the features added to our modern Bible over the years serve a valid purpose. They can be useful for finding things quickly, for looking up related passages, and for learning more about the meaning of a particular word or phrase. But not for reading big, not if we’re reading for distance or depth, which is arguably the most important thing we can do with the Bible.

If Adam Greene’s Kickstarter campaign has proved anything, it’s that a growing number of us are no longer willing to settle for the status quo when it comes to how we read the Bible.

Adam launched his campaign with hopes of raising $37,000 to create a small batch of high-quality, four-volume Bible sets without chapter and verse numbers. He reached his goal in just over 24 hours, and it kept growing from there. A month later, he’d raised $1.5 million dollars, almost entirely by word-of-mouth. “It is hard to say exactly what happened here,” Adam said in an interview with the Bible Design Blog. “Whatever the case, the conditions are clearly right for something like this.”

A taskforce on… typesetting
In 2003, Biblica set out on its own quest to rethink how the Bible is presented. We formed a small team of scholars, translators, designers, and typesetters, and called it the Bible Design Group. Their task was to come up with a more authentic Bible reading experience.
The result was The Books of the Bible, first published in 2007. The Books of the Bible and Bibliotheca are like one another in some respects. Both recognize the value of reading without chapters, verses, or other added features. Both prize literary beauty in their presentation of the text. Both experiment with the idea of a multi-volume Bible, publishing each major grouping of books as a standalone volume. 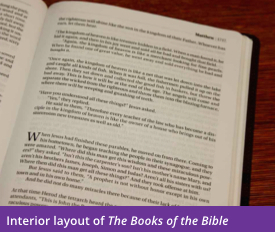 The Bible Design Group kept pushing. They took a hard look at the internal arrangement of the text as well. Does it really make sense, for example, to maintain the division between 1 and 2 Samuel–a division that was only introduced when the original Hebrew was translated into Greek and no longer fit onto a single scroll? Is “longest to shortest” the only way to arrange Paul’s letters? Once you’ve taken out chapter and verse numbers, is it possible to come up with an unobtrusive way to show the natural structure of each book?

The Books of the Bible pressed the reset button on much of the formatting that’s been introduced to the Bible over the years. It recombined books that were previously broken in two, like 1 and 2 Samuel. Luke and Acts, traditionally separated by John even though they were two volumes of a single work, were brought back together. Paul’s letters were presented in the order they were most likely written–which can make a huge difference when you’re trying to read them in light of his journey in the book of Acts.

The Bible Design Group also introduced line spacing to indicate the natural structure of each book. The bigger the space, the bigger the section break. Take Matthew, for example. It didn’t come to us in 28 chapters. Originally, the book was organized around five major speeches given by Jesus. Each new section began with some variation of the phrase, “When Jesus had finished saying these things….” The Bible Design Group took this into account, presenting the natural structure of Matthew (and the other books) in a way traditional chapter-and-verse Bibles can’t.

The Books of the Bible also became the basis for a reading campaign for churches, called Community Bible Experience. The goal? Transform the way churches read Scripture: to invite people to read the Bible less like a reference book and more like a story, as the divinely inspired literary work of art it is; to read and explore Scripture together without all the pressure or homework of a traditional Bible study.

Through Community Bible Experience, more than 500,000 people in 20+ countries have been introduced to The Books of the Bible and to a whole new way of reading Scripture.

With the success of Bibliotheca and the rise of new ways of reading Scripture like Community Bible Experience, one thing has become clear: people are ready for a fresh encounter with the Bible. And it just might start with a very different kind of Bible.