United Kingdom (MNN) — The Troubles– a 30-year period when domestic terrorists attacked Belfast, a city in Northern Ireland, United Kingdom. The violence lasted from 1968 until the Good Friday peace agreement of 1998. The conflict? Continue reading for a brief history lesson the 20th century. 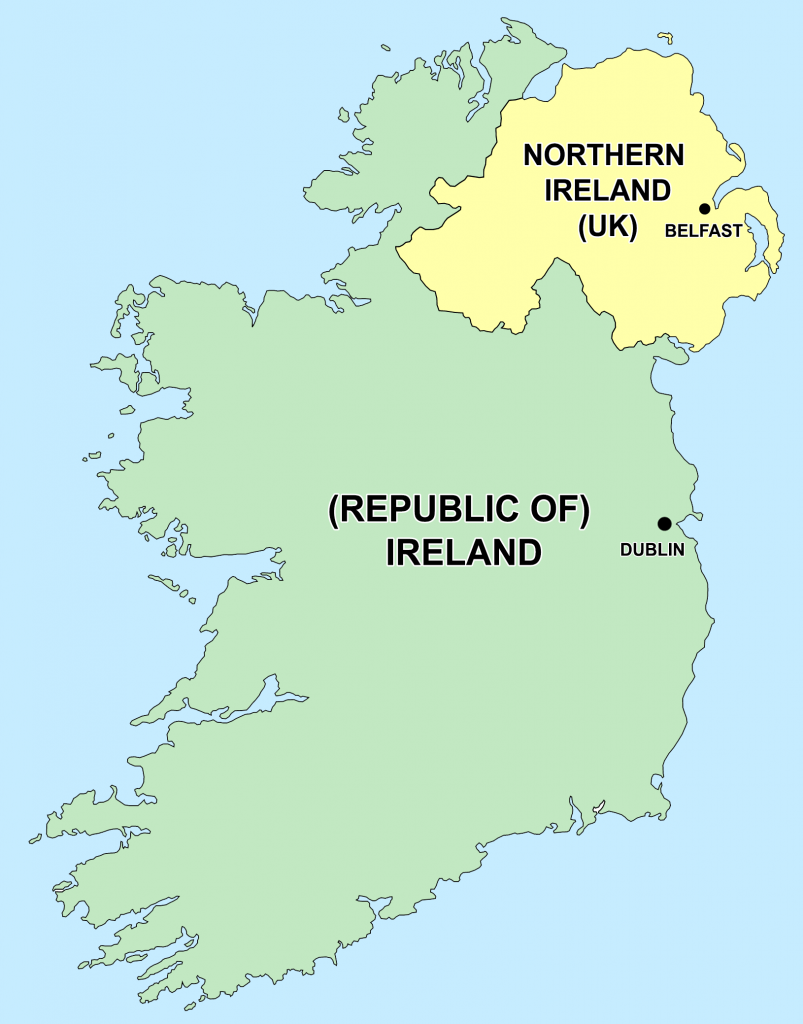 Political map of Northern Ireland and the Republic of Ireland. (Photo Courtesy of  Jonto via Wikipedia)

In the late 1960s, a renewed call for a united Irish island came from a new paramilitary group which resurrected the name and original goal of the original IRA.

This group was met with two main counter paramilitary groups who supported Northern Ireland remaining a part of the United Kingdom. These groups were called the Ulster Defence Association (UDA) and the Ulster Volunteer Force (UVF).

During The Troubles, thousands of people were killed from the fighting and attacks of these paramilitary groups.

These terrorists would bomb buildings, cars, and with a strange turn of thinking would kill even their own “people” for the sake of their cause. The fighting was bad enough that public restrooms were practically nonexistent in the city. There were few to no public trash bins on sidewalks for fear of bombs being left in them.

But, this isn’t where Northern Ireland’s complicated story ends. This political divide also fell upon a religious one—Catholic versus Protestant. Beginning around the 1500s, Protestant England began trying to expand its empire into Catholic Ireland. In doing so, Protestantism wasn’t well received on the island and became known as the religion of the English. This political and religious divide is still physically seen in Northern Ireland today along the peace wall in Belfast.

The peace wall divides the commonly referred to Loyalists/Unionists (United Kingdom supporters) who live on Shankill Road from the Republicans (united Ireland/island supporters) who live on the Falls Road. It was in this concentrated region that the Republican and Loyalist/Unionist neighborhoods collide where the fighting between the IRA, UDA, and UVF was most severe during The Troubles.

Belfast has experienced relative peace for the last 20 years and is a rather safe city today, but the effects of The Troubles are still present. Based in Northern Ireland, Biblica’s Executive Director for Europe Lindsey Holley shares:

“Some communities still have a legacy that is left over from The Troubles where there is a high level of poverty, low-employment, and issues associated with that.”

One of these places is the Shankill Road, the heart of violence during The Troubles.

The Shankill side of the Peace Wall in Belfast, United Kingdom 2014. (Photo courtesy of Beth Stolicker)

“We actually work with both Protestants and Catholics across the UK and Ireland, but we have a particularly strong partnership with a ministry based on the Shankill Road,” Holley explains.

“It came out of a Baptist missions ministry that recognized the Shankill as an area in need of the Gospel. Very, very dark past and some quite extreme problems with control by paramilitary groups and a real lack of relevant Bible-based ministry and outreach going on.”

Ironically, this ministry is housed in a building that was previously a main base for the leading paramilitary group in the area.

“It was a building dominated by darkness and evil and now it’s a church and it’s the center for spreading the Gospel across that area,” Holley shares.

“And we became connected with them because of their need for Bibles. Their need for regular Bibles but also their need for Bibles that were easier to read for people with low literacy due to low education attainment in the area. But also those with more serious learning disabilities [and] foreign language Bibles for some people who had moved into the area.”

The partnership between Biblica and this ministry functions this way: Biblica supports the ministry with free Bibles. And these particular Bibles are a part of the “Accessible Bible Project.” This project, which began in the United Kingdom and is now spreading, is designed for individuals who have learning disabilities, visual impairments, and reading difficulties.”

This NIrV Accessible Edition New Testament Bible has been very useful for the ministry in engaging people with the Bibles both on Sundays and through outreach. Why? Because now just about everyone who encounters this Bible feels like they can engage with it regardless of their education or reading level.

“There’s a wonderful couple that attends the church who previously describe their lives as being full of partying and drinking. And they knew of God but didn’t feel that there was a relevance to their life. But, through contact with the church there on the Shankill, they came to faith,” Holley describes.

The Power of Understanding

However, the next barrier was the Bible. This couple knew the Bible was important, but they felt it was too difficult for them to read. That was until they got their copy from this church.

“When you hear them talk about it their faces just light up. And the husband, he just gets so excited. He can’t finish his sentence and he’s just like, ‘I just, I just love it!’ Holley says. 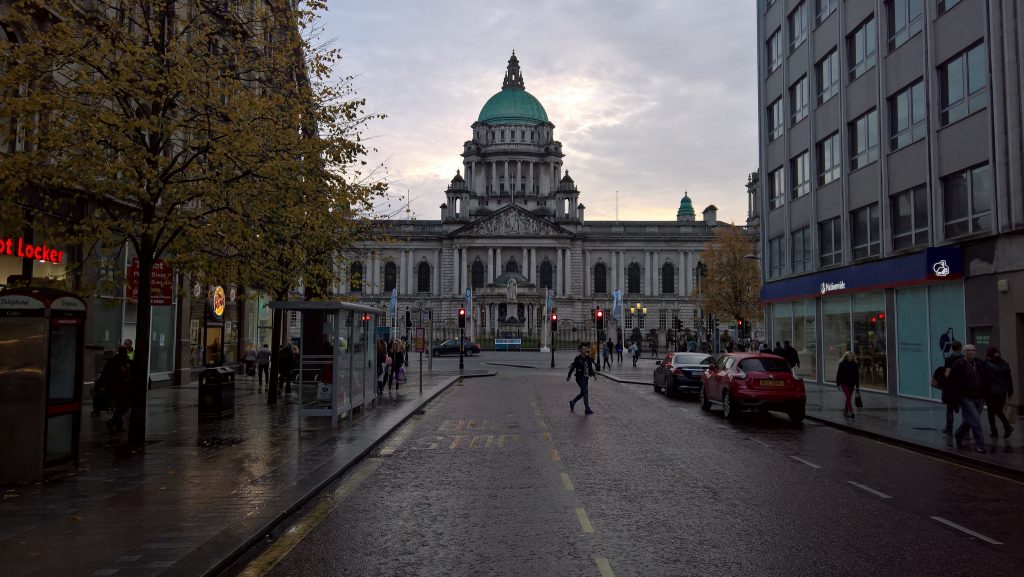 “It’s an encouragement to me to say ‘Do I love my Bible that much? If I couldn’t previously have read a Bible and then received one that I could, would I have that much joy? And maybe I should stop taking for granted the access that I currently have to the Bible.’”

While Europe has already been evangelized, it is currently unengaged.

In fact, Holley says at least in 17 countries in Europe, less than one percent of the population are Evangelical Christians. It’s clear there’s a need for the Gospel to be shared again in this region. And despite the fact that Europe is the place where the Protestant Reformation was birthed 500 years ago, updated Bible translations haven’t been common.

Be Prayerful, Be Active

With that said, the need for Bibles like the NIV and NIrV is ongoing. And not just for contemporary heart language translations, but also for audio Bibles or other mediums through which God’s Word can be communicated other than ink and paper.

How does this happen? By the Church being aware of this need for updated Bible translations which people can engage with in Belfast, Europe, and the rest of the world. Start learning about this need and how to help by visiting Biblica’s website and finding information on the projects the ministry is working on. To learn more about Bible translation, click here!

Another way to help is by financially partnering with Biblica to support translation projects and Bible distributions. Financially come alongside Biblica’s ministry here!

And finally, always be praying.

“Oh, we covet your prayers, we would love you to pray for God’s Word to get into the hands and more importantly the hearts of people across Europe,” Holley says. “If you could pray that through having God’s Word through new languages like our recently finished Serbian translation, that God would use that to build his Church and send revival to Europe.”

Find Bible projects, ways to pray, and ways to give specifically for Europe here!