Southeast Asia (MNN) — Accepting Jesus into your life includes a process of growth that will continue for the remainder of your life.

But how can Christians grow if they don’t get into the Word and learn about God? They can’t. And for some people, it’s not a simple choice to read the Bible or not. It’s a question of who is going to risk their life and who is going to sacrifice in order to make the Word available to them.

Earlier this year Vision Beyond Borders partnered with Voice of the Martyrs to deliver Bibles in Islamic countries. This goes along with VBB’s Bible projects in many areas of the world.

Patrick Klein explains why projects like this are so important: “The Church is really growing around the world, especially in SE Asia and the Islamic world as well. People are hungry for God’s Word, and without [it], how do they know what He requires of them and what He’s like and His character and His plans and His purposes?”

The focus of this story is two countries in SE Asia. The first one is a small communist country that VBB has been distributing Bibles to for the last 20 years. 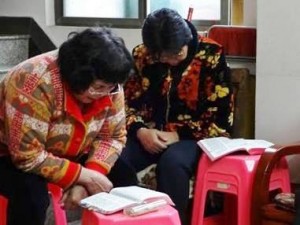 Klein says one major problem in this country is that while many people are coming to Christ, they don’t have the information to keep learning more about God–at least not the right information. Many times, cults enter into the situation and give the people what they call a Bible, though it is the exact opposite of the Word of God.

This is one example of why these people need the true Holy Bible in order to be grounded in the truths God has given us.

Klein says, “The Church is growing very, very fast. People are turning away from tribal religions and from Buddhism, and they’re searching for the truth of Jesus Christ.”

He shares the story of one man who led 100 families in his village to Christ, and he is now begging for more Bibles.

The other country VBB is working in is a closed country. “We’ve been working with tribal Christians there. There’s tremendous ‘turning to Christ’ among these tribal peoples; many of them are becoming Christians because they’re finding no hope in their religions and there’s no truth, so they’re coming to Christ. And we can’t keep up,” Klein says, referring to the number of Bibles.

A man from this country was imprisoned several years for his faith but now oversees hundreds of churches all desperate for Bibles. When they received a shipment of Bibles, tears filled this man’s eyes.

Klein says believers in this country may be able to purchase Bibles through the government church. However, this is risky. While one Bible might not draw attention, the purchase of 25-50 Bibles might lead to the purchaser being followed. In this case, the government is looking for underground churches to imprison any members. Klein describes the possibility of a man being followed back to his home, beaten for several hours, and his Bibles confiscated.

Buying from the government church isn’t safe, and it isn’t sufficient.

The Bibles VBB brings in cannot be found anywhere inside of the country.

To illustrate the desperation these people have to get the Bible, Klein says many of them will travel 2-3 weeks through the jungle to a checkpoint, hoping that team members might have a Bible.

Klein says when believers get grounded in the Word, they realize the need to share what they’re learning. And that is why Christianity is growing so rapidly as more Bibles are delivered.

It’s easy to get involved. Klein says, “If people could help us, we can buy a Bible for about $4 a piece for these tribal languages. That’s not bad: $4 is probably what a cup of coffee would cost at Starbucks.”

Klein says, “It’s great to have a solid foundation to stand on in a world that’s so rapidly changing and has no truth anymore. We know that the Bible is absolutely true, and we can stand on the Word of God and the promises of God.”

And here is another way Klein asks you to get involved: “Please keep praying for the Christians around the world that are in these countries. They are persecuted for their faith. It’s easy for us to forget about that, but please just take a moment today and pray for the persecuted believers around the world. Let’s do all we can to help them while we can.”