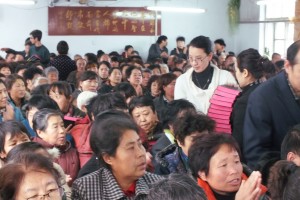 China (MNN) — One mission group is celebrating the New Year by connecting churches in China with churches in the West.

Wendell Rovenstine with Bibles for China says their January distribution team is laying groundwork for a new leadership training program.

“We have, as a ministry, been able to develop some pretty wonderful networks within China that are opening up to us and sharing with us their heart,” Rovenstine states.

“As you peel back the layers of what’s needed, it really opens doors of opportunity for the churches that are looking to really touch and make a difference,” explains Rovenstine.

Along with distributing Bibles to rural churches, Bibles for China is hoping to add a learning component in 2015.

The small team distributing Bibles in China this month will also meet with national church leaders. They’ll discuss who needs and wants leadership training, and how it could be put in place.

“Rather than wait and see if this works later on, and kind of ‘work through it,’ let’s just jump in,” says Rovenstine, explaining why they’ve sent a team to China so early in the year.