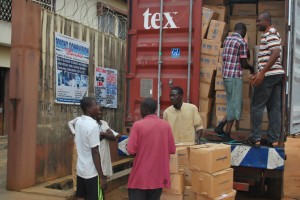 Unloading Bibles and books
at CRI’s distribution center in Nigeria.
(Photo by CRI)

Nigeria (MNN) — Jos, a city in Nigeria with a population of around 900,000 residents, according to Wikipedia, will soon be receiving a very important shipment.

Christian Resources International is shipping a container there.

“Within the sea container, there are 30,000 Bibles that are going to Lagos and into Jos, Nigeria,” says Jason Woolford, executive director of CRI.

The container is going into an area where Boko Haram is present and active. The terrorist group whose name means roughly “Western education is evil,” has been hitting current headlines hard with their elevated violence.

This message is not one Boko Haram wants people to hear. But those who do hear about Jesus and choose to follow Him have proven time and time again they’re willingness to die for Him.

Woolford says, “We’ve have Bibles and Christian books going into Jos and other places where, literally, people are being hacked with machetes because they’ve given their life to the Lord.”

This particular container going to Nigeria is a container of Bibles–the most important book to encourage these people living in fear.

Unlike the United States, one Bible will be shared among many people. That means 30,000 Bibles will be reaching more than 30,000 people with the message of Jesus.

CRI has made it possible for people to have access to the Scriptures for free.

Unfortunately in this world, providing Bibles isn’t free. CRI has trusted God’s calling and acted, but they need your help. You can help pay for shipping costs here.

Unfortunately, only one of the containers has passed through customs. The rest are stuck.

You may think of the Philippines as a so-called “reached” country, and certainly many people have gone there to tell the people about Jesus.

However, there is still a great need.

When a CRI team in the Philippines went to a local mall to get food recently, they encountered a man working at a kiosk. He was dressed like a woman.

Woolford began to tell the man about Jesus. The man, named Jude, said he knew Jesus loved him. However, Woolford knew he hadn’t accepted the changing grace that happens when you follow Jesus. He wasn’t free from the bonds of sin.

Woolford prayed with the man and talked to him for a while. He was able to lead the man to Christ and pray for release from the bonds of homosexuality.

Jude’s co-worker began to cry. She said she’d been praying for him for a year.

So even though there has been ministry to the Philippines, there are still people who need to hear the Gospel.

When Woolford looks for the next place to send Christian resources, he tries to get a sense of the places that seem most under the attack of the devil. In his mind, the devil is going to be working the hardest in places where people have the potential to do great things for the Kingdom of God.

Woolford considers that you yourself may be undergoing trials. He leaves you with these words of encouragement, urging you to stay fixed on the Lord:

“You might be going through some attacks in your own life. I don’t know if they’re physical, financial, whatever they be. God has never promised us perfectness on this earth. That’s why there’s a heaven and that’s why there’s Jesus Christ and His blood. But know this: God says that He will work all things to the good for those who serve the Lord.”