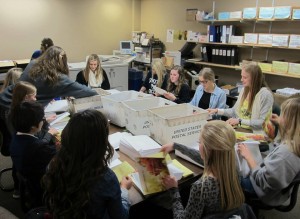 International (MNN/CBI) — Imagine being in prison on Christmas Day. Empty halls, no jubilant laughter or festive food: just prisoners in their cells, waiting to see if someone will visit, call, or simply send a card.

Crossroad Bible Institute wants prisoners to know they are not alone.

Hundreds of prisoners have written to CBI afterward, saying it was their only card they received all season.

Prisoners are not the only ones forgotten at Christmas time, however. Their families are left behind as well.

According to CBI, children seem to suffer the most. It’s estimated that in America alone there are 2.7 million children under the age of 18 with at least one parent in prison or jail.

CBI also says studies show these children are more likely to witness domestic violence than those in the general population. And just like soldiers returning from war, many of them will suffer the symptoms of post-traumatic stress disorder such as anxiety, depression, aggression, and addiction.

Again, CBI is reaching out to children of prisoners through Crossroad Kids. Their Magna Messiah course adapts the story of the life of Christ into a graphic novel, and the accompanying lessons teach children about God’s love and His purpose for their lives. In addition, Instructors lovingly disciple students with personal letters of encouragement.

Thousands of kids ages 7 to 18 are involved in the program. President of CBI David Schuringa mentioned they might even start a second Bible study.

Schuringa said, “It’s something wonderful for the people in prison to be able to recommend this to their children. Especially, you know, the fathers feel like they’re showing some spiritual leadership, and they say, “Hey I’m a student with the Crossroad Bible Institute, and you can be a student, too.”

Spouses are also getting involved through the program and in adult Bible studies. The entire program is knitting broken families back together.

Recently, CBI released a Spanish-speaking version of Manga Messiah. This is especially focused on children whose parents have been put in prison or jail for being undocumented immigrants.
Whether the family is allowed to stay in the country or deported, “They can experience the love of Jesus Christ and take that wherever they go,” says Schuringa.

CBI is in need of volunteer Spanish and English instructors. Click here to see how simple it is to make a difference in a prisoner’s life.