Ethiopia (MNN) — [EDITOR’S NOTE: The following report comes from The Voice of the Martyrs Canada.] 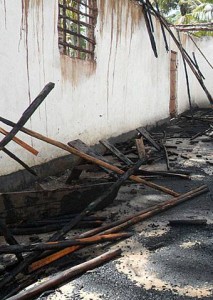 Churches are often targeted for destruction like this one burned down in Tanzania last May. (Photo courtesy of Voice of the Martyrs Canada via Facebook)

Local authorities in the Muslim-majority city of Harar destroyed a church building on November 28, 2014. Heaven’s Light Church, which served approximately 100 congregants, had ministered in the area for five years. At last report, these Christians are now meeting in the homes of individual believers.

In the days preceding the destruction, officials forcibly removed the church’s exterior sign and warned believers not to worship there, citing complaints by a local Muslim. Authorities also told church members who had previously congregated at the church “not to gather under what remains of the church building.” Furthermore, Christian leaders who protested the mistreatment were illegally detained, released only after community members called for their immediate release.

According to religious freedom advocates, there are numerous ongoing battles over land rights occurring between churches and local governments across the country. Efforts by the Muslim-majority populations to “eliminate the public presence” of churches has resulted in the forceful closure, destruction, and demolition of several church buildings in recent years.

In the aftermath of the destruction of their church building, may these Ethiopian brothers and sisters in Christ be strengthened and encouraged through the abiding presence of the Holy Spirit. Intercede for these dear believers, requesting that another suitable building will soon be found. Until that time, pray that each one of them would be able to continue meeting together for worship without any further opposition.

Also remember the authorities and local Muslims involved in this case, asking God to use the witness of His children in Harar to draw many to our Saviour and Lord Jesus.

To post a prayer for these believers during this difficult time, go to our Persecuted Church Prayer Wall.

This Voice of the Martyrs Canada article used Christian Post and International Christian Concern as sources.