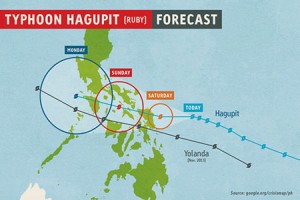 Philippines (MNN) — Typhoon Hagupit reached the Philippines on Saturday December 6, hitting the island of Samar. Hagupit then made landfall on the island of Masbate Sunday, bringing with it strong winds and heavy rainfall.

The Red Cross reports at least 27 deaths from the storm.

BBC says the typhoon has not been nearly as powerful as Typhoon Haiyan, which hit the Philippines last year, leaving over 7,000 lost or dead.

Hagupit, known locally as Ruby, is still traveling west and has been downgraded to a tropical storm.

Authorities also told BBC they were more prepared this time than they were last year when Haiyan hit the Philippines. Compassion International says the government established shelters and has extra food on hand to help in case of a disaster during the storm.

A resident in Bula told Reuters people were returning to their homes and cleaning up. But water, although it seems to be everywhere, is very scarce for drinking.

Flooding has become a major concern, and people are anticipating communication to be affected by power outages. BBC was told by Tacloban Mayor Alfred Romualdez the weather was good now, but tides are high, making it difficult for waterways to drain.

According to Reuters, farm minister Proceso Alcala said crop and farm infrastructure damage is at about one billion pesos, or $22 million USD.

Compassion reported 31 child development centers have been affected. They are providing initial relief to families, and field office staff is working to gather more information and provide support as needed, speaking to families and praying with them.

Pray for families and communities who have been impacted by the typhoon. Pray for minimal damage and loss as the tropical storm marches on.