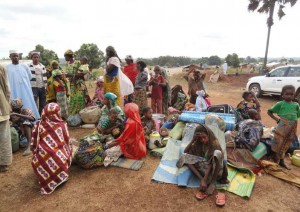 Abuses marred their rule, prompting a backlash from the non-Muslim Anti-Balaka militia and their supporters. That backlash forced Seleka leader Michel Djotodia into exile in January. Catherine Samba Panza was appointed as interim president in the transitional government. However, the revenge killing by Anti-Balaka militia fighters continue, forcing minority Muslims and others into safe havens and refugee camps by the thousands.

The recent attacks have forced taxi service to cease, says Jim Hocking, Founder and President of Water for Good, a partner with Living Water International and Reach Beyond in the CAR. “The [political] temperature of the country is taken by the taxis. When taxis are running, there are problems, but you can [probably] handle it. When the taxis quit running,” the situation is dangerous.

That caused difficulties for Water for Good workers. Hocking says, “We had been confined, basically, to the residence in the country. The embassy recommended we don’t travel.”

Water for Good not only provides water for the people of the CAR as a way to hear the Gospel, but also operates a radio station to help the public.

While their radio station continues operating, the water drill work has all but stopped. “For a little while now, we’ve had to lay off most of our staff; [we’re] just waiting to gain more contracts to drill more water wells. We’re still maintaining the water wells, but they do have to be very, very careful.”

Water for Life also provides water to a refugee camp near Bangui. However, that work has been turned over to the UN because of the unrest, even they weren’t able to provide water for a few days. It’s needed now more than ever. Hocking says, “The refugee camp climbed from about 30,000 people to about 40,000 in about two days because of this latest conflict.”

The conflict is dangerous for everyone. says Hocking. “There are many Christians, almost on a nightly basis, being robbed and hurt. The whole time I was there, almost every night we would hear of something happening to someone in one of the churches.”

Hocking is asking you to pray. “There are people who are really continuing to seek answers. Our Christian leaders need support. They’re still being associated Anti-Balaka are non-Muslims. So, it’s really a conflict between Muslim and non-Muslim.”

When it was time to leave the CAR, Water for Good needed a UN escort. All were able to leave safely.

If you’d like to support Water for Good, Living Water International, or Reach Beyond click on the organization’s name.