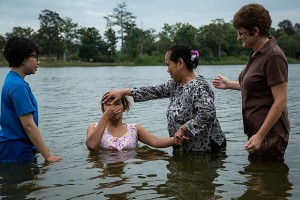 Thailand (IMB) — During their last visit to this small village in Thailand, the International Mission Board missionaries found out many workers were moving.

But this night was still special. Believers from another migrant worker camp just down the road came to share their testimonies. That camp is where IMB missionary, we’ll call Pamela O’Dell, serves. She came to encourage her friends as they shared with the neighboring village–a huge answer to prayer.

The journey to reach this unreached people group began five years ago with a simple prayer: two mothers asking God where He wanted to use their families.

Until O’Dell and her friend committed to prayer walking every day, the duo hadn’t noticed the migrant workers’ hidden shacks near their homes. The entire community works long, hard hours on construction sites, yet still lives in poverty.

Sometimes they aren’t paid for their work.

O’Dell knew God wanted her among these people desperate for love. “God said clearly, ‘You pass these people every day. What are you doing to share My love?’”

O’Dell, her family, and another IMB family prayed about how to build relationships with these migrant workers. Both families worked in the IMB’s support office, meaning they had professional jobs and worked a “normal” business day just like other accountants, programmers, and business managers. The only time to interact was at night, after work, which happened to be the best time for the migrant workers, too.

Soon enough, they were discussing a Christmas party. “In sharing that Christmas party, that one time, doors were opened,” O’Dell remembered. “It’s all through the power of prayer that happened.”

When workers started moving to different camps throughout the city, they invited O’Dell and other IMB missionaries to continue teaching the Bible in their new villages. Prayers were answered as seven migrant camps now have weekly studies.

One local believer worked side-by-side with the missionaries for years, trying to set an example for sharing one’s faith. She became a Christian despite opposition from her Buddhist family. Her people see trusting in Jesus as betraying culture and country. For many migrant workers, culture is so strongly linked with Buddhism they can’t imagine turning from tradition.

O’Dell asked churches to pray for local believers and migrant workers who have trusted in Jesus to stand firm in their faith. She knows ongoing prayer is needed for this people group to truly release Buddhist strongholds.

A church in North Carolina has already stepped up to partner. Salem Baptist Church in Apex spent 30 days in concerted prayer before sending a mission team.

Kim Powell, who works with Salem Baptist Church, saw first-hand how God answered their requests. After showing the JESUS film, a group of women crowded around as she answered questions about the movie vs. “real life.” Several prayed to receive Jesus as their Savior.

O’Dell admitted spiritual warfare and darkness still thrive in the villages and among the people. “Only God can take the Gospel back to their country. We need intercession.”

IMB challenges you to lay the foundations for reaching the lost by praying for a spiritual awakening and revival.