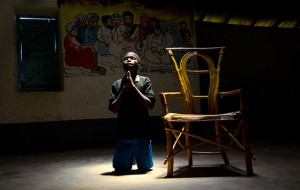 Did you feel heavy hearted going into Good Friday this year? I did. Each year heaviness seems to wrap around me when I contemplate the crucifixion. This year the heaviness felt more substantial.

The day before Good Friday, a brutal terrorist attack occurred at Garissa University College in Garissa, Kenya, (a little more than 200 miles from the capital city of Nairobi).

The Islamic extremist group al-Shabaab from Somalia, which has been linked to al-Qaeda, carried out the attack by separating the Muslim and Christian students. The gunmen murdered 148 people, mostly Christians who died because of their faith in Christ.

While Garissa is almost 100 miles away from our closest child development center and we have no Leadership Development students in that area, Compassion Kenya still feels the pain with its countrymen.

Dawit Hailu, Compassion Africa Regional Senior Director, resides in Kenya and had this to say:

“It was indeed a very saddening moment for all Kenyans–for me and my family, as well as the entire world. Innocent young university students slaughtered in cold blood. Many Christian union members were murdered that early morning while they were praying as a group. Actually, that took me back to my university days; as an active Christian union member, I could have been one of those students killed.”

Dawit was sobered. I must admit, I think I would have felt not only sobered, but perhaps hesitant to step into a church that Sunday after such a terrifying event in the country. Could the violence toward Christians at a university also happen at a church?

Yet again, the resilience and beauty of the African people serves as an example of courage and bravery in the face of sheer evil.

Dawit and his family, along with thousands of others, flocked to the packed churches on Easter weekend. One Kenyan church pastor proclaimed on Easter Sunday,

Kenyans displayed that powerful love in tangible ways this past week: standing in long lines to give blood for the wounded, comforting the grieving, providing supplies for the affected families, and contributing money. One of the most loving and brave things Kenyans are doing is not surrendering to fear, but choosing life instead.

“The killers would like to create a state of fear and uncertainty. We Kenyans need to be courageous, defeating the enemy in part by living our lives as normal.”

For residents of Kenya like Dawit, living “as normal” means many things … including diligent prayers for the government and living truthful lives. Sharing the love of Christ through Compassion child development centers and providing a brighter hope and future for young people.

During Holy Week, a horrible terrorist attack happened. During Holy Week, we also commemorated the brutal death of our Christ. But then, Easter Sunday arrived, and with it came renewed hope in the power of the resurrection and confidence that death is not the final verdict. As it does each year, the celebration of Easter reminds us that we will overcome and evil does not get the final word.

“We are wounded but unbowed. We will soldier on and defeat the force of evil that would have us cowed … Our resolve to work at a better future has never been higher.”