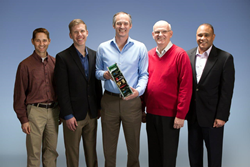 International (FCBH) — In January, Faith Comes By Hearing (FCBH) began their aerospace division with the hiring of Lt. Col. (ret) Gregg Leisman. Today, the ministry takes another step down the path of using satellite technology to broadcast Audio Bible content worldwide by announcing the members of the FCBH Aerospace Advisory Council.

The most recent addition, Dr. Peter Wegner, was the director of the Operationally Responsive Space Office at Kirtland Air Force Base before leaving federal civil service. He is currently the Chief Technology Officer for Spaceflight Industries.

“I’m humbled and amazed at the depth and breadth of experience in the professionals that have joined the council,” says Leisman. “They’re all national leaders in either space industry or telecommunications, and they have a passion to ensure ministries can leverage today’s technology to get God’s Word to every person.”

Including Leisman, the group has a combined total of 193 years of military service and aerospace industry experience. The members have agreed to a 3-year term on the council, with Adang serving as board chairman.

“I’m humbled by this wonderful opportunity to partner with FCBH in building on their over 40 years of ministry in making the Bible available around the world,” says Adang. “I’m also very excited about this calling to work with a very talented group of men, whom I am honored to have served our country with.”

The challenge facing the group is getting the Bible to 5.6 billion people who are unconnected; however, it is a problem-set they believe can be solved in the very near future. The council intends to explore the use of aerospace delivery systems and technologies similar to user-defined radio software, as well as virtual SIM applications and spread-spectrum radio technologies as a first step.

“It’s hard to imagine, but for the first time in human history, technology is making the fulfillment of the Great Commission actually possible,” states Troy Carl, FCBH vice president overseeing this project. “We are incredibly hopeful because of the God-given talents of this council.”

Established in 1972, Faith Comes By Hearing currently provides Scripture recordings in 875 languages spoken or signed by over 5.7 billion people globally. Through the Digital Bible Platform, FCBH offers free access to this digital collection of Scripture via podcasts, Internet radio, satellite TV and the Bible.is family of apps.