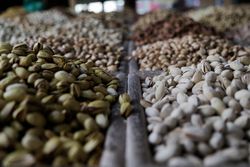 Arabian Peninsula (OMI) — [Editor’s Note: Nicole James is a freelance journalist, ESL teacher, and adventurer. As a communications intern for Operation Mobilization MENA, she’s passionate about publishing the stories of God’s works among the nations, telling people about the wonderful things He is doing in the world.]

In one country in the Arabian Peninsula (AP) outwardly closed to evangelism, workers are encountering new openness to the Gospel amongst locals. Through conversations, children’s comments, and curriculum, opportunities to share truth are increasing.

However, these workers also experience intense challenges–both physical and spiritual–as they seek to introduce neighbours, friends, and colleagues to Jesus. Pray for the men and women in this country to persevere, to faithfully and flexibly sow words of truth into its increasingly fertile soil.

On the way to pick up a rental car, long-term worker James* ducked into a coffee shop, hoping for a cold drink and a couple of minutes out of the Gulf’s intense heat. Inside, he greeted a local sitting at a table, and the two men struck up a conversation.

The local told James a long story about how he had met Mike Tyson. Clearly impressed by the boxing champion, the local man told James he thought it was sad that Tyson would never go to heaven because he had tattoos.
“What do you believe?” he suddenly asked James.

Praying for words and wisdom from the Holy Spirit, James remembered the concept of wasta, an Arabic word meaning important connections with someone in power.

“Jesus had wasta with God,” James began. “Jesus lived a perfect life. When He died on the cross, His sacrifice covered my sin. Jesus has wasta with God, and I have wasta with Jesus. Because I know Jesus, I will go to heaven when I die.”

The local leaned back in his chair and stared at James. “Wow,” he said.

As he left the coffee shop, James considered the conversation. Simply looking for physical refreshment, he instead had an opportunity to share about Jesus, the Living Water.

“This is too easy,” he thought. “Jesus is the way. The locals are hungry, and they’re thirsty for truth.”

Pray that James will continue to meet locals who are spiritually thirsty. Pray that the Living Water would drench this desert land.

Benjamin*, a team leader, said that his family’s role over the last five years has been diverse.

“We do some evangelism and some discipleship,” he explained. He and his wife also talk to their kids about why they live there: because they want to share Jesus’ love with their friends and neighbors.

To help their children with their studies, Benjamin and his wife hire an Arabic tutor to come to their house once a week. One time, Benjamin’s wife was talking to the tutor after the lesson. Deeply interested in the spiritual conversation, the tutor asked many questions, eager to know more.

At the end of the conversation, one of Benjamin’s sons stood up and announced, “And Jesus is God.”

Even though his son had brought up one of the most controversial points between Christianity and Islam, Benjamin was encouraged by his boldness. “Of course, he’ll learn the timeliness of when to use nuggets of truth,” he added.

Pray that Benjamin, his wife and his children will develop relationships with their friends and neighbours and find fitting times to share the truth.

Working for an international company, Benjamin also has opportunities to be a light to locals at and outside of work.

“Thanks a lot for your greeting,” Benjamin responded. “But what’s the background of this?”

“I went to my imam [Muslim religious leader] and asked him if it was OK to greet a Christian with, ‘Merry Christmas,’” the colleague responded.

At Benjamin’s office, where he is known as a Christian, such connections happen easily. In fact, Benjamin also gave the same colleague a New Testament.

Pray that Benjamin will meet people open to spiritual truth, and pray for local believers to persevere in spite of difficulty.

Joanna*, another long-term worker, has encountered opportunities to share at the schools where she teaches. Recently, she discovered a hidden surprise in the textbooks her students carry to and from school every day: whole sections of the Scripture, including the Sermon on the Mount in the Book of Matthew, chapters six to eight, typed out on the pages.

The textbook developers “meant to study the Bible as an ancient kind of literature,” she explained. “Of course, the school wouldn’t include this in the curriculum, but the books are there.” For anybody flipping through the pages, the text is clear.

By studying 16th century British poets, Joanna gives her students some insight into Christianity. John Donne, for example, became a believer partway through his career. While his talent remained the same, his theme changed completely. After his conversion, Donne confessed that he was no longer afraid of death.

Joanna also talks about why the Protestants immigrated to America to find religious freedom.

The students “ask me if I am Orthodox or Protestant,” she said. “Before, they asked me if I was Muslim or Christian, but now they learnt something from the textbook.”

Her answer is simple: “I believe what the Bible says.”

“They want me to be in a box, so they can know who I am,” she said. “In the beginning they were confused because they are so used to this box. I tell them, ‘Whatever the Bible says, I believe in it.’ They are beginning to accept this kind of idea.

“Obviously, I cannot really say a lot of things,” she continued. Sharing the Gospel is prohibited where she lives. However, by challenging her students’ religious perceptions–and pushing the labels that they like to give others, she hopes to help them think outside the box.

Pray that Joanna will continue to expand her students’ preconceived notions about Christianity and spark curiosity about the Bible. Pray that her students will read Jesus’ teachings for themselves.