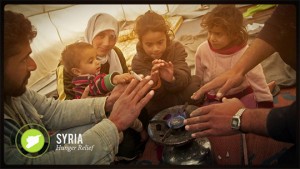 Over 12 million displaced Syrians–the largest number of displaced people in the world–desperately need that aid. But, according to the UN, there’s not enough money coming in.

You might be reaching for that “X” button, but don’t leave yet!

“We get desensitized; you get tired of hearing the story over and over again,” admits Jeff Palmer, Executive Director of Baptist Global Response (BGR).

“[But] people in-need never fall off God’s radar. We really should begin turning our eyes towards this, because the opportunities for love and making Christ known are unbelievable right now.” 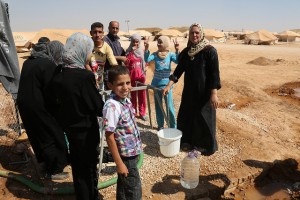 In March 2011, the Syrian government tried to wipe out pro-democracy protests inspired by the Arab Spring using excessive force. Anti-government protests grew over the course of 2012 and eventually spiraled into a full-blown civil war.

The toll of that war can be listed in statistics, but remains difficult to comprehend:

“Imagine one-third of the population of the United States had to leave their home [tonight], and they couldn’t go back,” suggests Palmer. “We would call it a crisis, wouldn’t we?”

And yet, people immediately lose interest when they hear the phrase “Syrian crisis.”

Along with international agencies like the UN, WFP, and WHO, Palmer says faith-based groups like Baptist Global Response are responding in Christ’s name.

“All of us working together are making a small dent in the needs that are there,” he reports.

Since 2012, BGR has been sharing the hope of Christ with refugees in-need by meeting practical needs.

“In the midst of the deepest crisis are the deepest places that the Gospel can go, and touch, and make a difference.”

“I wish our listeners could go and see and hear these stories first-hand, and visit some of these places to understand that these are people, just like you and me,” Palmer says.

“I think that would stimulate those who’ve become apathetic to get more engaged and say, ‘We want to see God’s goodness come out of the midst of this chaos.'”

By focusing on the One who can ease Syria’s problems and pain–instead of getting overwhelmed by the sheer size and scope of the crisis, Palmer says much can be done.

Print this and put it on your mirror as a reminder to pray daily for Syrian refugees.

“Keep praying with us…that our folks would get the resources that they need to minister, and that they would be bold in making Christ known in all that they do,” Palmer states.

“The local believers and our partners on-ground, both in Syria and the surrounding countries: [it’s] amazing to see how they are stepping up,” reports Palmer.

“Many of them have lost their homes themselves. They’ve lost everything, but they’ve said, ‘This is an opportune time for loving our neighbors and making Christ known.’ It’s just inspirational.”

“If folks are interested in going, give us a call, contact us,” Palmer urges. “It’s amazing: we’re seeing medical healthcare teams, water filtration teams, and a few ‘life instruction’ teams helping us to help those who are in so much need.

“What a beautiful, beautiful picture of the Gospel.”