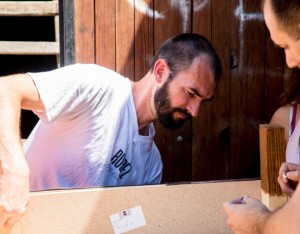 Over the last few months, nearly two million people have been affected by heavy flooding in Serbia. People have evacuated their homes, leaving their possessions and livelihoods behind.

Returning, homes are waterlogged, walls and floors are water damaged, and possessions are lost or destroyed.

For one town, Kraljevo, a carpenter is making all the difference.

Jovica Gecan stepped up and took tragedy by the reins.

With funds from Baptist Global Response, Jovica and his assistant Lazar have helped to repair walls and buy new furniture. He also gathered volunteers from his church and  taught them how to make couches that fold out into beds. For the past few months, the Christians have been working hard to turn out as much of the product as they can for flood survivors.

After large amounts of training and labor, the team can make furniture that costs one third of what is found in stores. The team has given away 47 couches and plans to give away 60 by the end of November.

A mother and daughter received relief from the group. They lived in a shed for four months after extensive damage to their home. They were not able to fix or fund repairs on their own.

As winter drew closer, their worries grew. They didn’t know how they would survive the freezing temperatures. But Jovica and his group were able to provide beds for them and repair their walls and floors in the house.

Jovica knows the recovery efforts not only helped survivors, but also volunteers. The unemployed or underemployed people in his church have learned new skills they can use to find jobs and income.

BGR will be financing a new small business, led by Jovica. He will employ and train people who need jobs to provide for their family.

Jovica believes there is a desire for rocking chairs in his area, and he plans to fill it while also showing the love of Christ to those around him.

Pray for those affected by the flooding throughout Serbia.