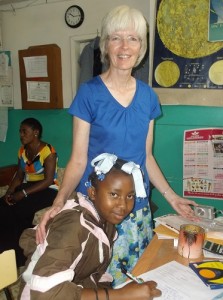 Haiti (MNN) — For less than a cup of coffee a day, you can change someone’s life.

Seems like a pretty good Return On Investment (ROI), right? Baptist Haiti Mission runs a lean, efficient child sponsorship program. Spokesman Ron Sparks acknowledges a lot of ministries have similar offerings, but “there’s a face behind every story, every sponsorship that someone gets involved with. It’s more than sending $25 a month to a mission and wondering what happens.”

Proper medical attention, meals, and books for school are all benefits that children in BHM-sponsored schools receive. Personal relationships between sponsors and children are a focus of the program. The Gospel is also incorporated into every part of the program, because this is where true life change happens, Sparks says. “The driving force behind the education program was teaching children how to read, certainly for their own betterment, and to help them to be involved citizens in the country of Haiti, but from our perspective, mainly to allow them to read the Bible.” 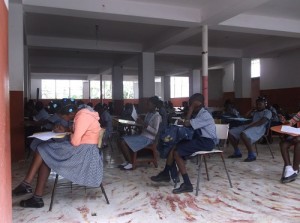 How does all this happen? Sparks explains: “100% of that donation goes to help the children in Haiti. That goes to help give them schooling, textbooks, uniforms, and a hot meal each day.” These funds are not directly given to the families, but are administered through national BHM workers with plenty of oversight. Families pay a small registration fee at the beginning of school, which allows parents to carry responsibility in caring for their children.

Even better, it creates ownership and encourages participation. The end result of that helps build a stronger community. “In most cases, the parents cannot read or write, and yet the children are able to read stories to them from their Bible or from their school lessons, and in many cases, to help their parents to learn to read or write some, as well.”

With all of the sponsor programs, what makes the BHM offering stand out? Relationship, says Sparks. “One of the things that our missionaries try to do is, whenever possible, get the child sponsor in touch with and visit personally the children that they’re sponsoring.”

One of the best ways sponsors begin their relationship with their child is sending a picture of themselves and their family. This enables the child to understand who is praying and supporting them. Families often display pictures of their sponsors in their home to remember their sponsor on a daily basis. It’s also an investment in the future, Sparks adds. “When that kind of relationship is built, it’s a commitment not only to the individual child but to the program, so when that child graduates from school, those child sponsors are anxious to sponsor another child.”

Darlene Winn, one of the Child Sponsorship Program staffers, recently shared some observations in an e-mail following a sponsor meeting her child for the first time. She writes:

[Sic] How rewarding it was for her to finally meet Mitchellanda and to see her lovely smile in person.

She also was able to meet Mitchellanda’s mother at the Mission where we found out the mother was never able to complete fourth grade and did not read well. Mitchellanda is finishing the fourth grade, reads well, and does well in school.

The school children were testing this month, getting their report cards on Friday. Also there were graduations for pre-schools, sixth graders, and high schoolers. And it was World Cup month with most of the Haitians Brazil fans. Everywhere one went, there were shirts and hats in Brazil’s colors or flags flying for Brazil on motorcycles, buses, and cars.

As Frankie and I sat outside relaxing before supper one evening, we could hear a radio broadcasting the game and then “stereo” cheering from first down the mountain and then up the mountain when Brazil won that day.

Three weeks in a row we also had visits from the Crossings campers who took a day here at Fermathe to tour the Mission and to see their sponsored child for the first time at the Mission playground where they could play on the Ark, too. I translated for a new sponsor each time. 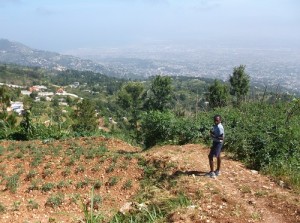 That’s a lot of ROI for roughly 85 cents a day. The good news is that while the program is growing, there’s still room for more. “There are hundreds of children that are sponsored through the child sponsorship program, but there are thousands more that would love to have a sponsor in the 350+ schools that BHM operates there in Haiti.”  (Click here to start exploring Child Sponsorship)

PRAY FOR: Vacation Bible School Teacher Trainings to be held in Fermathe, the Aribonite region, and Central Plateau in July and in Savanette region, the Summer Bible Institute, and in Northwest Haiti in August. Also pray for Vacation Bible Schools held for 5 days each in July in Gran Savan and Fessard by two visiting teams.