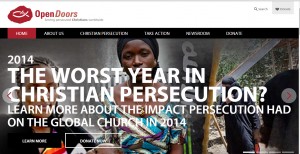 International (MNN) — How would you rate 2014? Good? Bad? Somewhere in-between? Emily Fuentes with Open Doors USA says it’s been a rough year for the global Church.

There has been more persecution in 2014 than any year in recent history.

“My entire time here, I have never seen, first of all, the types of stories (the widespread persecution) or the significant increase globally in persecution.”

From the ISIS crisis to Nigeria’s kidnapped schoolgirls, much of this year’s persecution springs from a single source: radical Islam.

“We are seeing the rise of Islamic extremism in many countries where it wasn’t necessarily as present–or even present–before,” says Fuentes.

For example, Christians in Iraq previously faced persecution on a “moderate” level: believers were pressured by society and governmental restrictions. It was “never the whole Christian community fearing for their lives, like they are now,” Fuentes shares.

Syria, another persecution hotspot that’s frequently in the headlines, jumped from #37 to #3 on the Open Doors World Watch List in just three years.

“Every year the World Watch List comes out, there are more and more African nations,” Fuentes adds. “They continue to rise because of Islamic extremist groups, like al-Shabaab and Boko Haram.”

And yet, hope prevails.

In many cases–and 2014 is no different, stopping the Church is like killing weeds: the more you try to eradicate them, the more they grow.

“It would seem like in countries where there’s so much more persecution, it would have that effect of stopping the growth of the Church, right? That’s what these governments or Islamic extremist groups are all attempting to do,” Fuentes says.

“But the most amazing thing that we’ve seen over the years is that, in fact, it causes the Gospel to flourish.”

See how the global Church prevailed in 2014 with help from Open Doors.

This unprecedented year of persecution is also leaving behind significant needs, along with a $1.8 million funding gap for Open Doors.

“We’re asking and praying that people would prayerfully give to help our brothers and sisters,” shares Fuentes. If you can help Open Doors financially, click here.

“Persecuted Christians have seen this over and over again.”