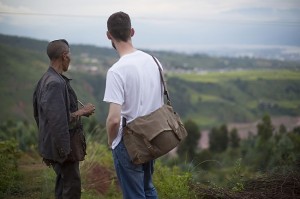 East Asia (IMB) — Editor’s Note: This story was written by International Mission Board. For security purposes, names and location names have been changed.

Jon Gerwig was discouraged; it had been 16 months of sharing the Gospel, but not one person had put their faith in Jesus.

Gerwig, an International Mission Board missionary, came to East Asia in 2004 to work with the Iron Pea people group, which had no known churches and only a handful of believers.

He and his coworkers used a new method of ministry called “Scripture planting,” which integrates Bible translation with real-time church planting, evangelism, and discipleship.

Although they used resources such as a chronological Gospel story and Bible recordings, “it didn’t seem like anyone was interested,” Gerwig said.

In 2006, Gerwig took a team of Southern Baptist volunteers to share the Gospel in an Iron Pea county, but the first day, no one responded. The next morning, the team prayed together and set out into a new area.

As they walked along a mountain path, they met a man named Solomon. He asked the group what they were doing, and Gerwig told him they were just climbing the mountain and learning about his people’s culture.

“He looked at us straight away and said, ‘That mountain behind me is boring, and besides, I think you came here to see me,’” Gerwig recalled.

Solomon invited the group into his home, and there they shared the Gospel story–and he immediately believed in Jesus. Solomon then shared his own story.

“[Solomon] knew that there was a most high God, but he didn’t know who He was,” Gerwig said. “So every day for 20 years he had been praying, ‘God, send somebody to me to explain who You are.”

“And he looked at me and said, ‘And God answered that prayer today when He sent you to me.’”

As they talked, interested neighbors crowded around to see the visitors. Solomon did not waste time: he told the crowd, “This is my friend from America. Now, look at me. I have a story I want to tell you,” Gerwig recalled, and Solomon shared the Gospel.

Over the next several months, Solomon led his wife and one of his children to faith in Jesus. And by the beginning of 2007, there were eight believers in his village. But the village’s witch doctor saw these changes as a threat.

On day four, the day after he should have died, people in the village asked Solomon, ‘What do you know that we don’t know?’ Again, Solomon shared the Gospel, “this time with more power,” Gerwig said. 80 people believed in Jesus.

On day five, people from a nearby village came to Solomon and asked the same question. Again, Solomon shared, and 60 people believed.

Over the next nine months, Gerwig and his team trained these new believers in a basic discipleship plan, and in September 2007, the first church among the Iron Pea people was started.

Since then, the Gospel has spread throughout Iron Pea communities. Multiple “second-generation” churches, which are churches started by Solomon’s church, and several third-generation churches have been started. Today, there are 28 churches and approximately 3,000 believers among the Iron Peas.

“The power of the Gospel was apparent in the life of Solomon,” Gerwig said.

Pray for the community to continue growing in their faith and love for God.