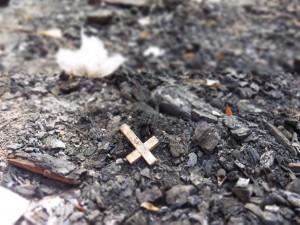 Niger (MNN) — Picture this: You go to church one Sunday. You worship God, hear an inspiring message, pray, talk to friends and then you leave, hoping to return the following week. Unfortunately, when you return, your church has been burned to the ground by protesters.

That’s exactly what happened to 61 churches in Niger over the weekend, says missionary Neal Childs who’s working there. “Last week, churches all across the nation went on without any idea that churches would be burned.”

Childs works with churches in the region. “Four of our churches were attacked. Three [they] actually got in and did great damage. Two of our pastors’ homes were also burned. A Bible school was also burned.”

Childs says the attacks happened simultaneously in Niamey. It appears police and other security officers were overwhelmed and couldn’t control it. 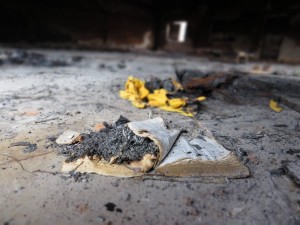 Despite the hot fire, this Bible wasn’t completely burned. (Photo by Danette Childs)

How has this affected the church?  “The church is strong in Niger, and it’s growing. And we believe that as a result of the persecution, it’s going to grow even more. All this senseless attack will only be turned around for the growth of the church.”

The good news: not one Christian was killed in the attacks. Childs says rioters and police officers suffered the casualties.

President of Open Doors David Curry says protesters in predominately Muslim Niger violently reacted to the Charlie Hebdo comics in France. “What they’re doing is lashing out at what they consider to be as their prime enemies–or someone they see is aligned with the West–and attacking churches. It’s caused quite a bit of destruction.”

Niger isn’t even listed on the Open Doors Word Watch List of nations responsible for persecution against Christians. But, Curry says, “Christians are always a target in many of these countries.”

Curry says the last 12 months were the most violent against Christians in modern history. Will it spread? “It’s going to continue to spread in Nigeria, Chad, in some of these countries where Boko Haram and al-Shabaab and the like are present in Africa. So yes, it will continue to spread. There’s no doubt in my mind about that.”

Open Doors helps in situations like this. “We help rebuild churches that have been destroyed because we don’t want that to be their victory. A lot of times we help with trauma counseling. Those are the kinds of things that Open Doors is doing, and you can be a part of.”

You can listen to David Curry’s complete interview here.